When the bowl was empty she continued for a space to regard it silently, as though exploring the many-sided recesses of her mind.
“You have claimed to be a story-teller and have indeed made a boast that there is no arising emergency for which you are unprepared,” she said at length. “It now befalls that you may be put to a speedy test. Is the nature of this imagined scene”—thus she indicated the embellishment of the bowl—”familiar to your eyes?”
“It is that known as ‘The Willow,’” replied Kai Lung. “There is a story—”
“There is a story!” exclaimed the maiden, loosening from her brow the overhanging look of care. “Thus and thus. Frequently have I importuned him before whom you will appear to explain to me the meaning of the scene. When you are called upon to plead your cause, see to it well that your knowledge of such a tale is clearly shown. He before whom you kneel, craftily plied meanwhile by my unceasing petulance, will then desire to hear it from your lips… At the striking of the fourth gong the day is done. What lies between rests with your discriminating wit.”

There was a time when it did not occur to anyone in this pure and enlightened Empire to question the settled and existing order of affairs. Indeed, it is now no unheard-of thing for an ordinary person to suggest that customs which have been established for centuries might with advantage be changed — a form of impiety which is in no degree removed from declaring oneself to be wiser or more profound than one’s ancestors! How narrow is the space dividing such delinquency from the actual crimes of overturning images, counselling rebellion, joining in insurrection and resorting to indiscriminate piracy and bloodshed.

As the wise philosopher Ning-hy was wont to say: “Where the road divides, there stand two Ning-hys.” Indeed, thus and thus it is with the origins of the famed Willow Pattern composition, as depicted on porcelain bowls for many cycles past.

But who attempts to eat an orange without first disposing of the peel, or what manner of a dwelling could be erected unless an adequate foundation be first provided?

That which in justice requires the amplitude of a full-sized cask shall be pressed down into the confines of an inadequate vessel.

A well-known fable there is, purporting to explain the meaning of this thought-out design; an imagined tale, framed by the makers of porcelain to entice the credulous; and herein does its falseness cry aloud. Though frequently exalted in poetry, or delicately enhanced with music, by many meritorious purveyors of high-minded entertainment, the tragic romance of the maiden Koong-Tse and the secretary Chang is entirely without substance, a pure invention of those native to the Isle of Sceptres; for truly may it be said that the Willow Pattern is precisely as authentically Chinese as Kai Lung himself. 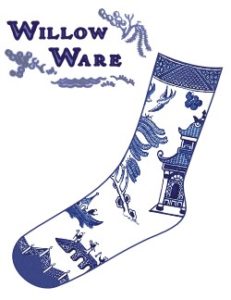 Unrolling her threadbare mat in tribute to the latter incomparable relater of imagined tales, this wholly inadequate person now raises her distressing voice, and wields her disreputable needles, to recount in textile form the Story of Wong Ts’in, that which is known as “The Legend of the Willow Plate Embellishment.” This story is that of the scene widely depicted on plates and earthenware; the true and authentic legend as first related by the eminent Tso-yi. 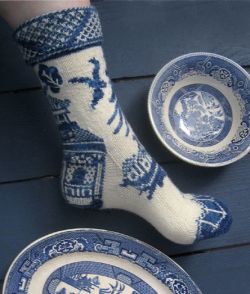 How cunningly imagined is the device by which objects so varied in size as an orange and an island can be depicted within the narrow compass of a porcelain plate without the larger one completely obliterating the smaller or the smaller becoming actually invisible by comparison with the other! This engaging display, combining simplicity with picturesque effect, might indeed be a scene having an actual existence at no great space away. 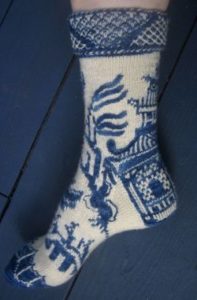 In its transmutation from porcelain ornamentation into whole cloth, not only has the embellishment suffered no real detriment, but there has been imparted to the higher lights — doubtless owing to the nature of the subtly shaded colorway used to delineate them — a certain nebulous quality that adds greatly to the successful effect of the various tones.

Thus and thus, and by the opportune agency of their own incomparable skill and dexterity, may this striking embellishment be transferred from its former disposition on select pieces of porcelain to a covering for the sumptuous feet of the esteemed if bewildered auditors of this tale.

Poker Online Gives The Compliment Back to Bettors

How to Know The Return Slot Machine Gives in Casino Online?